Synthesizers plays a huge role in modern music making. It plays lead for most electronic dance music and it´s used for texture and effects in many rock songs.

For the user interface we will be using Nexus UI which is a API specifically designed for Web Audio based applications.

First, open your favorite code editor whether it is notepad++, sublime text or brackets. Personally I prefer to use brackets.

Then you need to create a basic html structure and save it as a html-file. 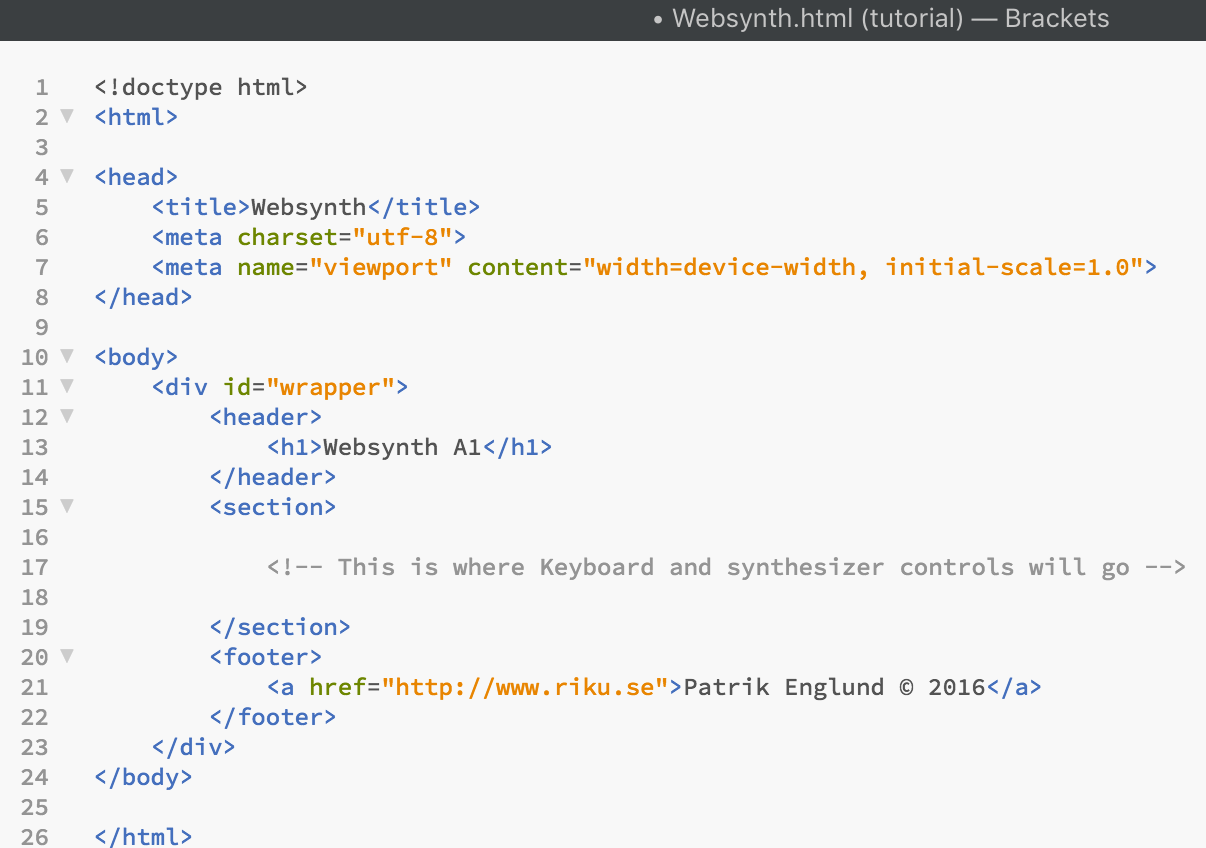 In my example I have set up a basic web page with a header with a <h1> title, a section where all the synthesizer controls will go and a footer.
The most important part here is to add <meta name=”viewport” content=”width=device-width, initial-scale=1.0″> in the head-tag which will make it easier to design the synthesizer for smart phones.

Next go to nexusosc.com and download NexusUI.js and put the js-file in your project folder. Add it to your head tag with <script type=”text/javascript” src=”js/nexusUI.js”></script> to make the API usable.

Now that Nexus UI is active let´s add a musical keyboard for the synthesizer with <canvas nx=”keyboard”></canvas>.
In this tutorial I am thinking we will have two oscillators for our synth which will be producing sounds, so lets add two basic html Select tags with Options for some oscillator types. In my case I added support for square, sawtooth and triangle waves.

To give the generated sounds some character the user of the synthesizer should be able to detune the oscillators, therefore lets add two Nexus UI dial controllers with two <canvas nx=”dial”></canvas>. 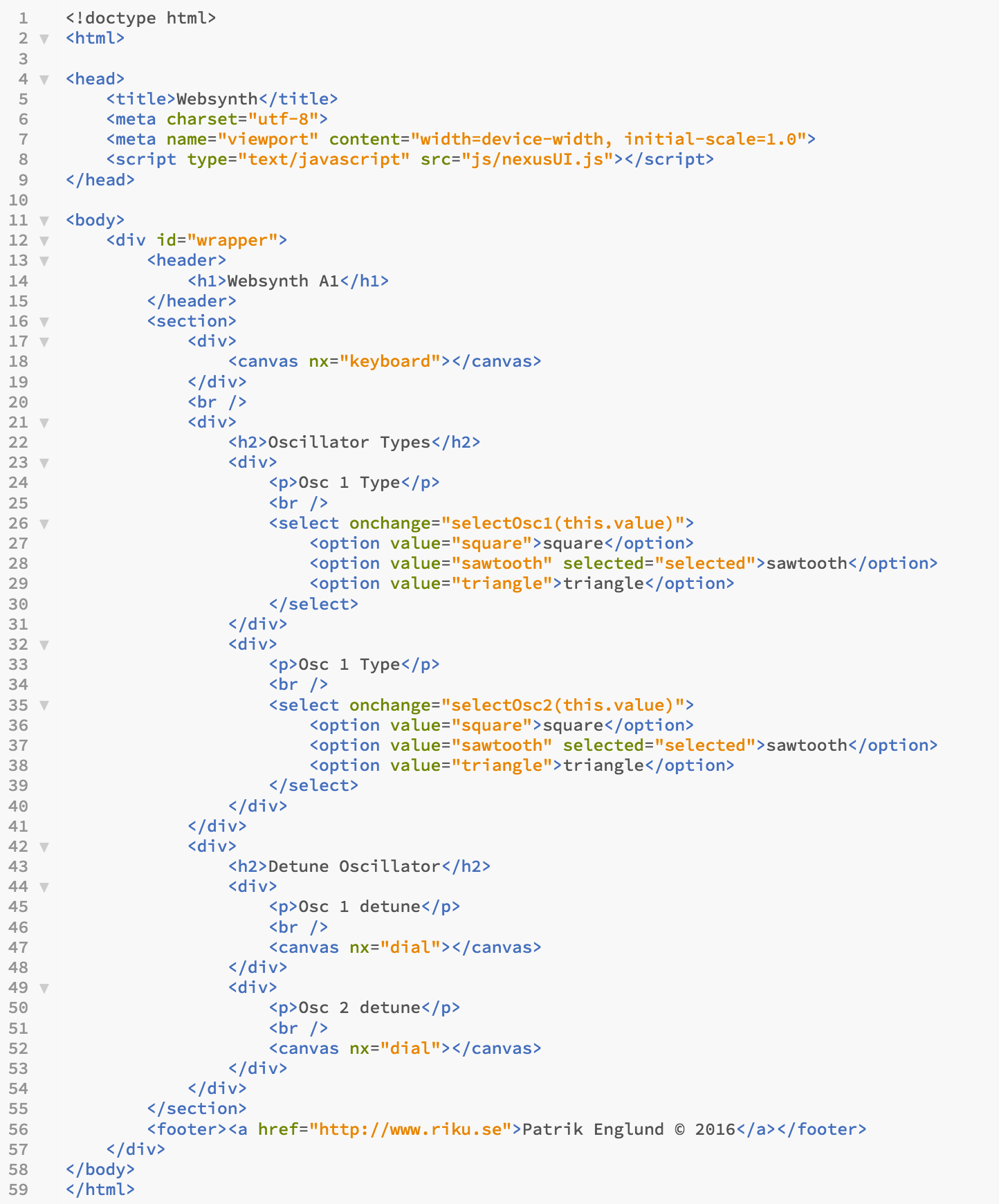 Above you can see how my code looks this far. As you can see I have also added some div tags, a couple of id´s and onchange events to the code – this is to prepare it for the coming JavaScript and CSS.

Now to get to the meat and potatoes of this synth, the code which will make it run.

First create a new blank js-file and save it as synth.js (or something similar).

Then add var oscillators = [];  to prepare oscillator arrays – this will be used later.
Add gainNode.gain.value = 0.3; to lower the volume output somewhat. This is not absolutely needed but makes the synthesizer sound more comfortable for headphone wearers.

Next we will add the following code:

To make use of the oscillator type selectors we created earlier we need to add a couple of variables and functions:

This code will get the oscillator values based on what the user has chosen in the html selector options.

Now we need work with Nexus UI to make use of the musical keyboard and interface. Begin by adding nx.onload = function () { } to start Nexus UI in your code. Every call to Nexus UI needs to be done inside this nx.onload function.

To set up the specifications for detune dials insert:

Just by naming the dials dial1 and dial2 Nexus UI will automatically understand which dial you are referring to.

To set layout colors for the entire Nexus UI add:

Then to make use of the musical keyboard add the following code:

In the else part the you stop the sound with:
oscillators[nx.mtof(data.note)].forEach(function (oscillator) {oscillator.stop(audioCtx.currentTime);});.

If everything is set up right your code should look similar to the following example: 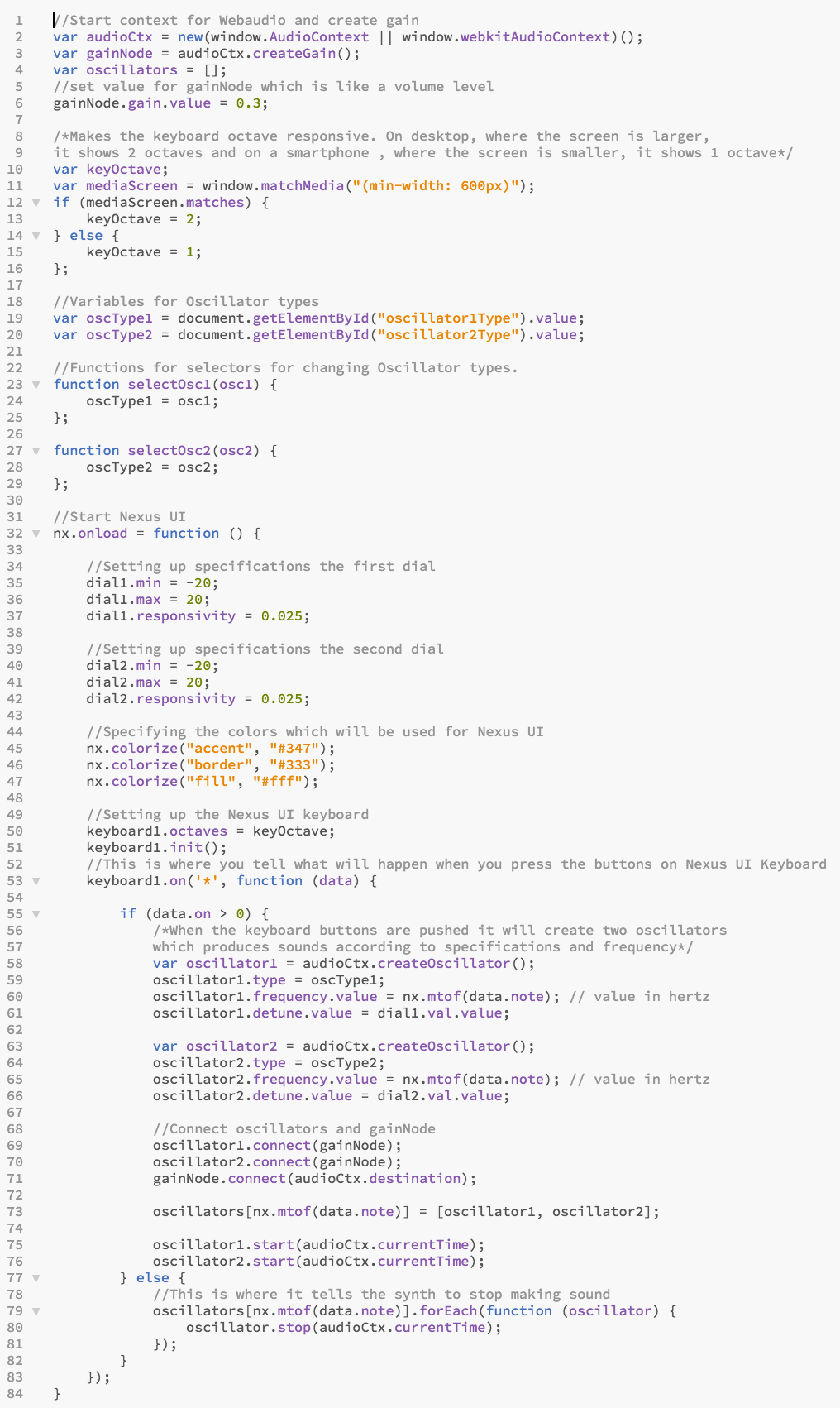 To make use of this code you need to connect your js-file to your project by adding it at the bottom of your html-file with a script tag (in my case I use the following tag <script type=”text/javascript” src=”js/websynth.js”></script> ).

To make your synth look pretty you need to design it with CSS.
Now, cosmetic design is very much a personal preference, so I feel weird telling you what colors or structure use. Instead I´m just going to show you what my CSS looks like. That way you can start from there and create your own design. 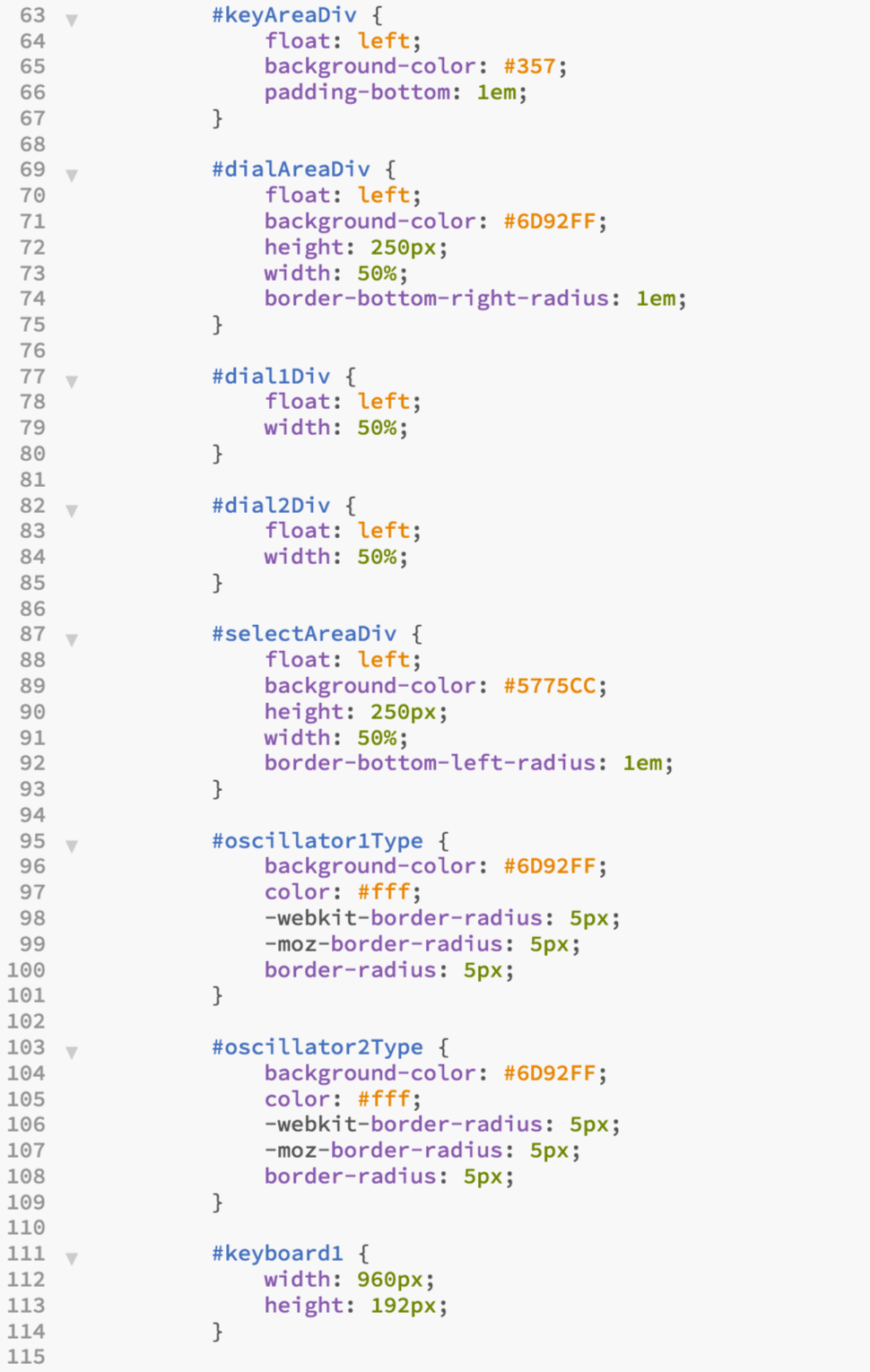 This CSS sets the design for the desktop version of the synthesizer. The interesting part comes next when we need to make the synthesizer responsive.

There are different ways to set up a responsive site, in this tutorial I will keep it very basic with only one breaking point.
Often you use percentage values instead of px values when you create responsive design but when using Nexus UI we need to mix both percentages and px values because of how it works.
The width is set to 360px because it works pretty ok and looks good on both iPhone and android devices. As you can see many divs use percentage values, this is to get the order of the divs aligned right where I want them to be.
The width for Nexus UI id´s,  like keyboard1, dial1 and dial2, are set to specific px values because they look better in the design this way. I could use percentages but it will be a hassle because of how Nexus UI works.

When you have finished your CSS and connected it to your html-file you should be done and have a working web-based synthesizer which you can control via the mouse on your computer or with a smart phone touch screen. You can see how my Synthesizer turned out below: 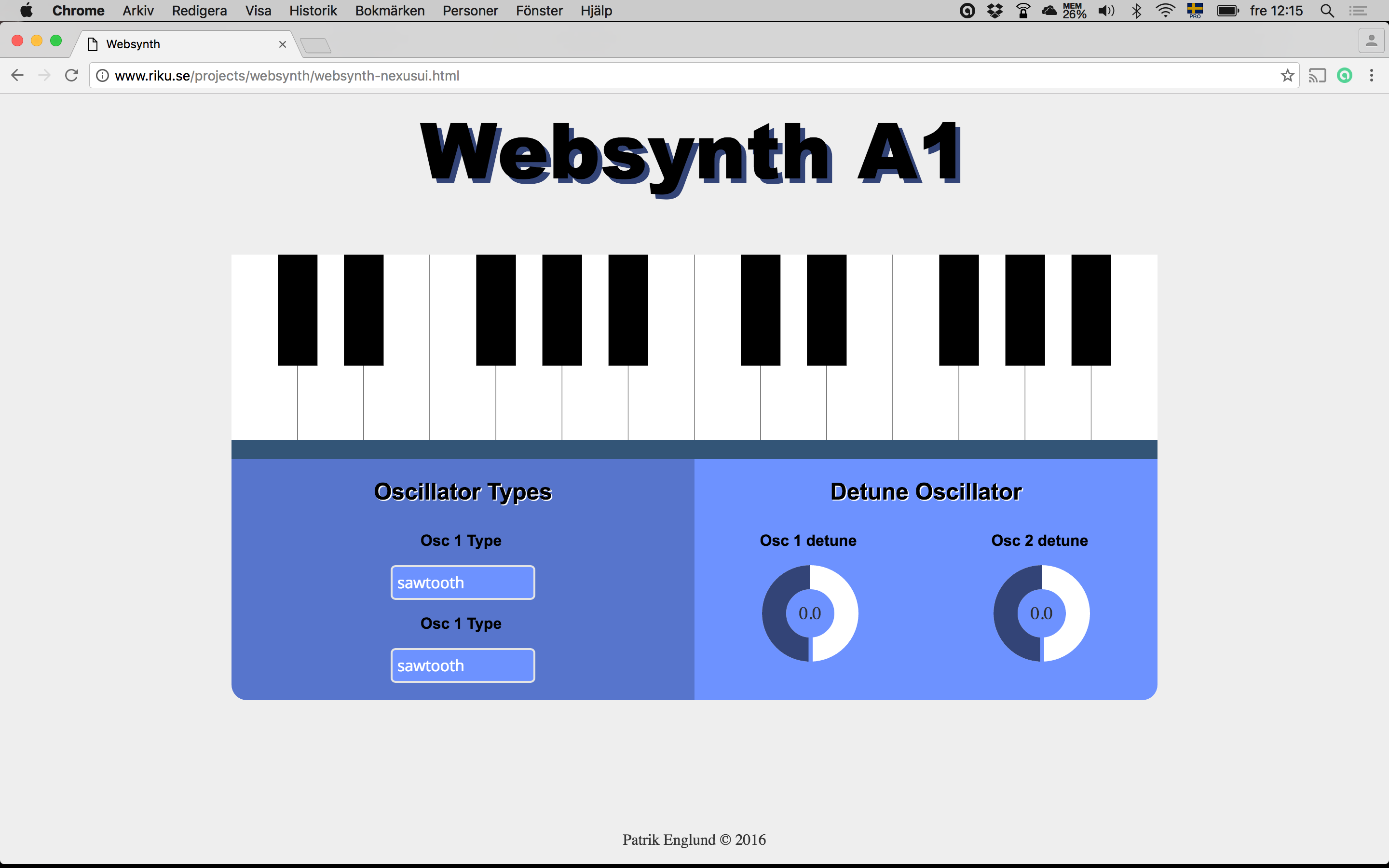 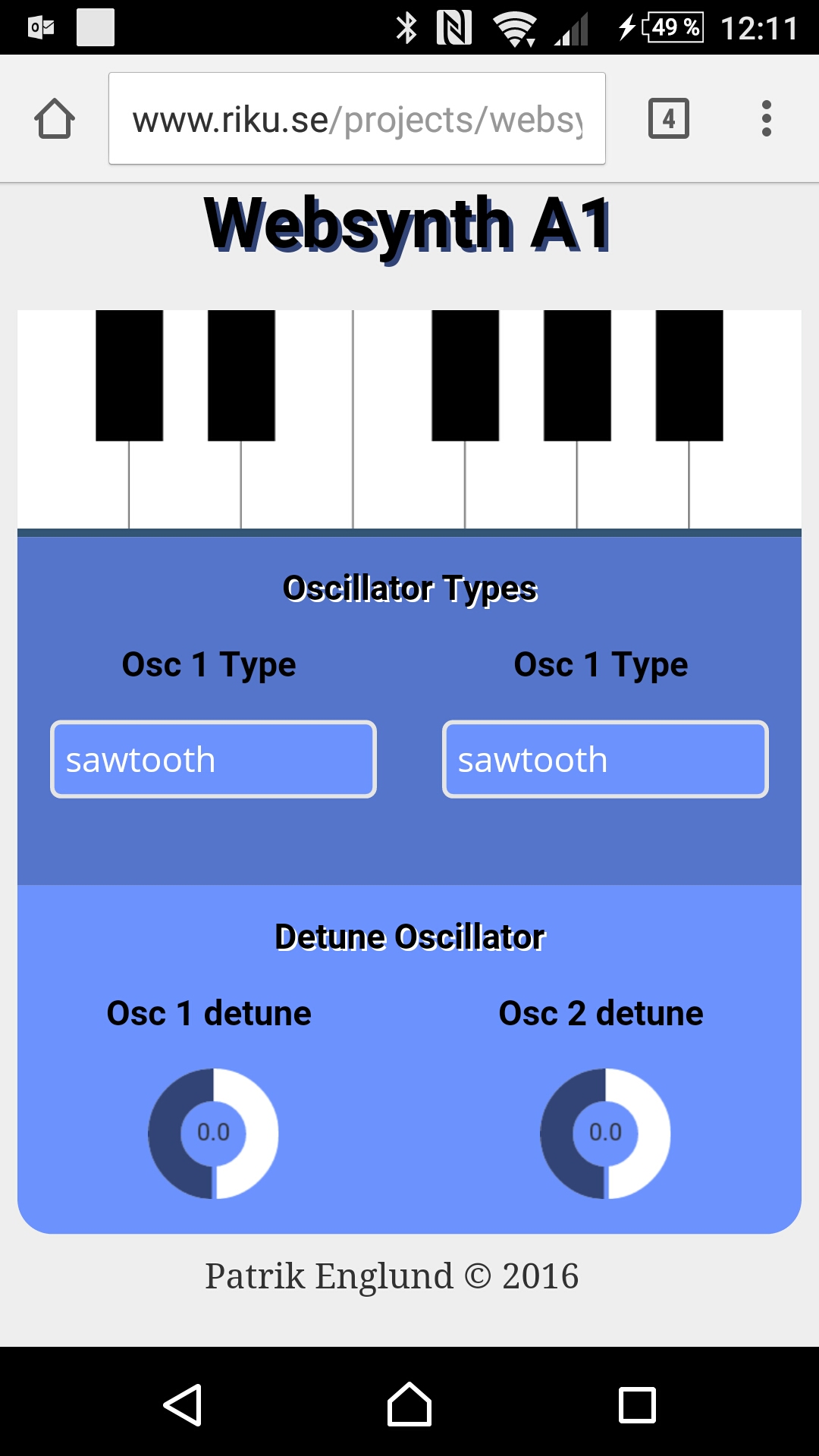 If you want to try the synthesizer click here.

If you want to see my entire code you can download this zip file with the websynth. I am Patrik - a driven, effective and positive Web Developer based in Stockholm, Sweden.